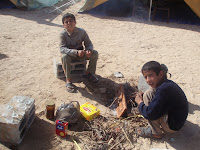 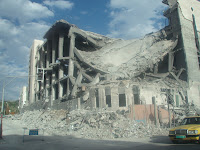 WE WERE IN A MOSQUE waiting to meet a Hamas leader when we were jolted by a loud explosion. I was sure the explosion wasn't that of firecrackers. Could be a rocket or some explosives, I thought. The congregation had just finished their maghrib prayers. No one looked alarmed. Some latecomers proceeded to perform their prayers. Oh yes, I forgot to mention that the mosque was dark just before the explosion and everyone took out the handphone and used it to find their shoes and the exit door. I asked a young man if he had heard the explosion. He said yes. Was it a bomb, I asked. Could be, he said and left. I asked an elder person and he just shook his head. When I finally got hold of the Hamas leader, he said it must have been a rocket or a bomb but didn't bat an eyelid after that. I remarked to him that the people in the mosque didn't seem worried or fearful when hearing the explosion. His response was simple: "Brother, we are used to this. This is our life. You know that we went through hell these last few weeks. We live in fear all the time, but what choice do we have? Life goes on my friend..."
Posted by Ahmad A Talib at 4:59 AM

I hope you are back safely.

Brother, reading your reports on your trip brought tears to my heart. I prayed and will continue praying harder for the safety and well-being of Palestinians in Gaza and other parts of their country. I have been moved by the efforts of protests by many quarters in the world against the horrible attack on Gaza. The pressure seemed to work, albeit short-termed.

I can't help thinking that protests (even calls of boycott) should also be made against the rich Muslims (countries, corporates and individuals) who have not done much to help the plight of the Palestinians. I can’t believe that after gaining their (small) rights over their lands, no proper security planning and infrastructure have been done. The best the rich Muslims can do is to provide assistance in planning, and even money for these purposes. Palestine is now a government. But it has not been able to behave like one. I know it’s tough inside, especially with the blockades. However nothing can stop rich Muslims from assisting in planning. Meetings can be held outside of Palestine. Obviously urgent there’re urgent needs of food and medical supplies right now, the past and in the future.

They urgently need proper security planning and preparations. Don’t feed them with weapons but with thoughts. Time to change. Insaf dear rich Muslims.

May Allah spare you and them all.

Not many would risk their life and go beyond the call of duty and money to serve vuctims of war. Thank you Dtk, for being there carrying the Malaysian flag and also for the meaningful insights from the war-torn Gaza.
I just pray that Malaysians would open their eyes big n wide, and appreciate what we have in this blessed nation.
Racism, between or within any community would KILL US.

I wonder if these incidents can be exported to the US citizens through their numerous Talk shows.

They need to know the truth.