Death is an everyday scene in Gaza 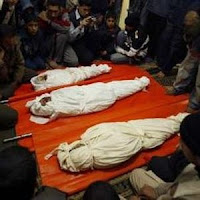 VIOLENCE BEGETS VIOLENCE. There are no two ways about it. Palestine will always be shrouded by smoke of bomb blasts while the smell of death permeates every corner of the tiny state. While the world points fingers and debate in their airconditioned room as to who is right or wrong, children are massacred at will. The bombings and cry for help are brought right into our living room via CNN, the BBC, Aljazeera and other world TV network. As we grapple with an economy that is threatened by slowdown, Palestinians are trying to seek meaning to their existence. Burials are turned into parades and call for revenge and vengenace. And as Muslims greet the hijrah of 1430, the sounds of gunfire, rockets and mortars replace the sound of firecrackers and voices of merriment. No cheers, just tears. And here we are trying to make sense of our own peaceful backyard, while Palestine bleeds and struggle for existence. This picture of Palestinian children about to be buried following the Israeli attack on Monday is but an everyday scene in Gaza...
Posted by Ahmad A Talib at 6:33 PM 3 comments: 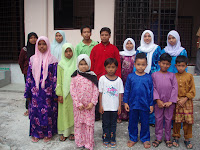 HOPEFULLY, ONE OF these children will grow up to serve his or her felllow friends, and be a useful member of the larger community. At this point in time, they are in need of help from us. They are the orphans I've been writing about this past year. A number of them are not in the picture. For the past 12 months, the $1 a day contribution given by friends and relatives have been very useful. At $30 a month, these children have bought books and some personal items to help them through school. A couple of well-wishers have offered books and I'm trying to set up a book club to enable them to read more. For those who you who have sent email expressing interest to see them visually, well, here's one for you. My deep appreciation for all contributors and may each and everyone of you be blessed forever.
Posted by Ahmad A Talib at 5:24 PM No comments: 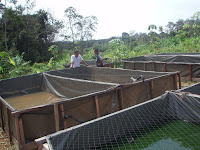 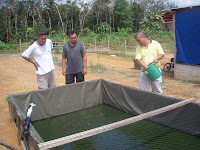 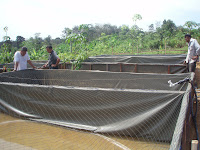 WHILE many people are planning and executing mega deals through their connections and network, Am, a farmer-contractor, plods along doing some basic agriculture stuff. No high-end sales pitch, no big political backing, no big bank loans. No publicity too. Am, a nickname by which he is fondly called by his friends, has just embarked on a catfish rearing project which he hoped would yield good returns from the third harvest onwards. That would be sometime in September or October. He's invested RM1,600 each for his 21 canvas-ponds (as these pictures show). He's hired a rubber tapper to help manage the catfish project. The rubber tapper has fallen on bad times with the big drop in rubber prices. When I asked how he's coping with the big drop in income, he gave me a toothless grin and said: "Nasib baik ada projek ikan keli ni!" Am has done some excellent replanting scheme for the kampong folks in the lower Perak area. As aging landowners whose children have gone on to live in the cities earning good, regular salaries, these folks now found their plots have grown lalang and are untended. The lands have become idle, unproductive. Then came Am, riding in to rescue these old folks with replanting schemes funded by Risda, the government agency entrusted with helping rubber smallholders. Am has organised these folks and they are now quite happy to see their four or five acres being toiled once again. Talking to Am over near his catfish farm, the young man is full of ideas to help the rural folks raise their income level. He said: "Orang kampong nak tengok contoh macam mana projek pertanian boleh menjamin hidup mereka. Kalau setakat hantar gambar dan berpuluh makalah (brochures), lebih baik tak payah. Kalau dia orang nampak projek depan mata boleh berhasil, mereka ni boleh diajak berunding." For the last couple of years, that's what Am has been doing. And doing it well, I must say.
Posted by Ahmad A Talib at 4:29 PM 6 comments: 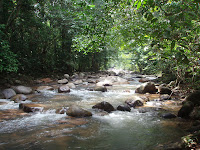 
The picture has nothing to do with thestory. It's a favourite jungle hideout where I can take a dip in crystal clear water and feel fresh again, especially after a tiring day.
Posted by Ahmad A Talib at 12:22 AM 4 comments: 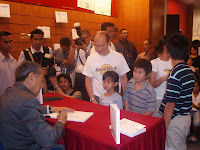 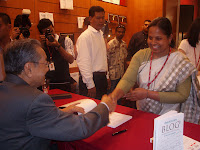 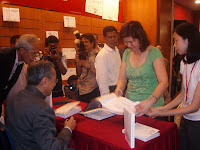 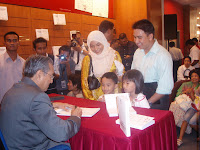 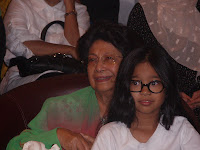 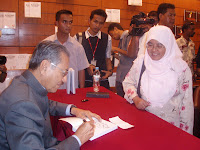 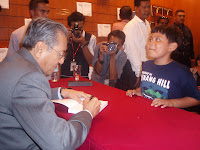 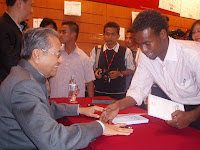 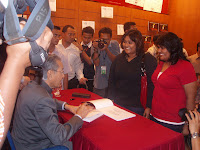 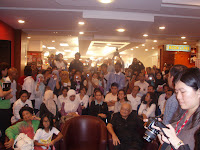 I MADE a dash to the Mid-Valley yesterday to see top blogger Tun Dr Mahathir Mohamad signing his blogging book at the MPH boook store. It was a very big turnout. I squeezed in to take some pictures, hoping that the pictures can be a new feature in my blog. It took me several days to learn the trick, but I hope it's worth it. Dr M was accompanied by his wife, Tun Dr Siti Hasmah Mohd Ali. The Tun's other blogger in the family, Marina, was also present, with her daughter. The book store owners had to limit those wanting to get Dr M's personally-autographed book to 100. It was standing room only at the book-signing ceremony. Dr M had time to answer only four questions, with a reminder from the book's publisher, Datuk A Kadir Jasin, that questions were confined to those about writing only. No political questions allowed, AKJ said. Responding to one of the questions, Dr M said writing blogs called for a balanced and responsible approach. Same as in the traditional media, he said.
Posted by Ahmad A Talib at 4:30 PM 4 comments: 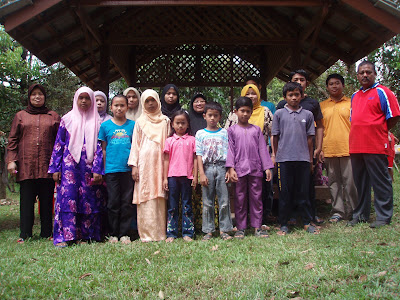 MARIAM, thank you for helping to restore my streamyx! Thank you for your call early this morning. Now I'm waiting for my Yayasan Salam office to have our connection restored. I'm sure it'll be up and running tomorrow. 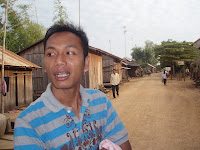