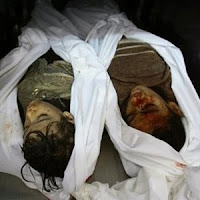 TODAY'S Friday. In seven days, the death toll from Zionist Israel's attack on Palestine have reached 410, and rising. Aljazeera reported that 2,000 are wounded. Numbers don't lie, as the statisticians would tell you. As do this photograph, courtesy of AFP. Wasn't it Jimmy Carter who said that there won't be substantive and permanent peace for any peoples in this region as long as Israel is violating UN resolutions, official American policy and the international road map" for peace by occupying Arab lands and oppressing the Palestinians...?
Posted by Ahmad A Talib at 1:04 AM

pictures tell a 1000 words. but words and pictures not enuf la! damn the zionists...

u should organise a massive campaign on this. u have this kind of thing dulu. media kita tidor ke?