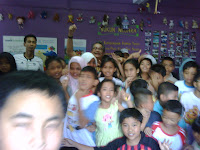 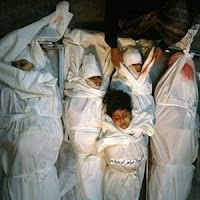 I HOPE THE NEW YEAR WON'T BE JUST BLOOD AND DEATH. I know everyone is wishing each other Happy New Year and all that. In fact, as some of you may have countered, you may have received the same SMS from friends who had forgotten that they had sent you the same one earlier! They all mean well, that's for sure. And what's a few SMS sens among friends anyway! But amidst all the merriment we see around us, amidst the lovely fireworks that lit up our peaceful sky, we know that elsewhere the sky is being lit up with fires of death and destruction. As the accompanying Reuters picture show, these children are collateral damage in the unending violent and fiery feud between Israel's Zionist regime and the Palestinians. It's been going on for years. And it's going to go on for many years to come. As the Palestinian children awaits their burial after the senseless shelling over Gaza by the US-backed Israelis, we all know that the average national lifespan of Palestinians are being reduced by each burial. "My 12-year old cousin is a martyr," declared a Palestinian teenaged girl over Aljazeera yesterday. Such is the perspective of these children, I thought to myself. As for the other picture, taken using the Blackberry Bold, shows me and my chowkids. They include what is termed as street children (anak jalanan) and children of sex workers in the Chow kit area. Hence, chowkids. Cared for tirelessly by husband and wife team of Raja Aziz and Fidah, these children seek and are given shelter, guidance, motivation and help at Rumah Nur Salam, one of the sustainable projects of Yayasan Salam Malaysia. I spent a bit of time with these children yesterday during lunch, as 35 of them join three others in residential schools when school reopens next week. Not many people would give these children a chance of doing anything good. But we took them under our care, and the dedication, devotion and love showed by Raja Aziz and Fidah are beginning to show very encouraging results indeed. We do have 5A scorers among them mind you! It makes everything worthwhile! Everything really. It's on the back of these two pictures that I wish each and everyone of you a very happy and prosperous new year! Salams to all!
Posted by Ahmad A Talib at 12:57 AM

Salam Datuk
Peace in our hearts and on earth.
Happy New Year.

Selamat Tahun Baru 2009 Dato'.
The situation in Palestine (Gaza) pains me, and I wonder what we could do to ease their suffering?
The donation drive n such are mushrooming every angle and for a start such initiative could be better coordinated / centralised towards a SINGLE FUND.
Apart from getting funds n other necessities maybe its also time for some kind of a 'more unified and BRAVE political initiative'.
Let us, Malaysians, initiate something worthwhile since our Government (read Abdullah Ahmad Badawi) has become lame when it concerns the fate of fellow humans in Palestine.

Lets regain our lost Pride and Confidence as a NATION, Dato'.

May yours be wonderful and full of blessings!

TQ for your new year greetings! But I couldn't use the 2nd part of your greetings 'cos too personal...hehe! Jgn marah ya...you take care Bro!