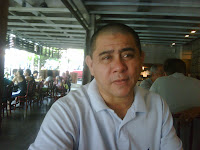 LIFE STARTS AT 40! That's what I told Bob over breakfast yesterday. Bob (real name Borhan) is a friend of mine working with the Tenaga Nasional Berhad. InsyaAllah Bob is set to undergo an open heart surgery on Tuesday after he suffered a heart attack in late January. We chatted over ubi kayu rebus and roti bakar at Chawan in Bangsar before he goes under the surgeon's knife at the Damansara Specialist Centre. Bob have many friends especially in the media since he was doing a lot of corporate communications work for the GLC. He shares the same surgeon as Tun Dr M in the person of the Tan Sri Dr Awang, a legend among heart patients in the country. Let's doa for Bob's speedy recovery after his surgery. "Give me five hours and you'll be as good as new," his famous surgeon told him. Bob won't be riding his big bike for a while but that's a small price for lifelong health. Bob's father, himself a heart patient with a similar experience, told him not to worry as such surgery is increasingly common nowadays. See you in Bangsar soon Bob!
Posted by Ahmad A Talib at 1:54 AM

See you in Mahbob Bob. Let the surgeon do his job, you just take a break. God Bless You bro.

Yes, it's TS Dr Yahya and not Awang as i wrote. TQ Samsul..

Saw Bob last night. He looked good and was looking forward to the Op. I thought that was good. Kita sama-sama berdoa that he goes though it well this morning...and we'll be rejoicing both here and in Indonesia!