Heard about casualties before Umno poll? 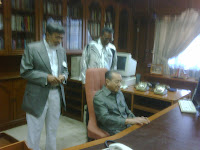 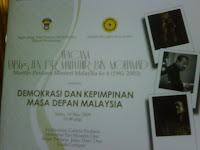 WHAT'S THIS I HEAR about some potentially explosive developments in the run-up to this month's annual Umno general assembly? No one wants to give an outright confirmation but word is going around that there could be surprises in the contests for key posts.

Could there be straight fights in certain key posts, instead of three-cornered as we see today? I'm told that the next few days could reveal some hot developments which may set the tone for this year's assembly.

Candidates vying for posts were in Kuantan today and will proceed to Johor Baru tomorrow (Sunday) to be officially introduced to members, including delegates. It's good to look at the body language of the contestants for key posts. I won't put any money on it but talk on the ground is that there could be casualties even before the race starts in two weeks time.

I stayed clear of domestic issues for a while to focus on the Gaza Photo Exhibition. Now that it's on, I can resume ground visits to see what's the latest. This morning (Saturday) I attended Dr M's talk on democracy and Malaysia's future leadership. A full house, and it was quite apparent to me that many people have burning questions to ask.

They are looking for answers, as if trying to unlock some mysteries concerning Umno, the new, incoming Umno president, money politics, the confusion in Perak and the country's future. Dr M, despite fighting a bout of cough during the talk held at the Tun Hussein Onn Memorial, have got answers for all the questions. We don't have to agree with his views, but they are worth thinking about:

On Perak: "Too many mistakes made. Umno was too hasty. You ask the Sultan to remove the MB. As far as I know, it's not in the constitution. Granted that a Ruler can reject a nominated person to the post of MB after an election, but the next person must be someone who commands the majority support in the House. You started on a wrong footing..."

On Datuk Seri Najib Tun Razak: "Najib can form his own Cabinet when he becomes PM and this is a good time to remove those who don't perform and are corrupt. If corrupt people are chosen, Umno will lose the next general election."

On politics: "You ask me why politics is not stable...Najib can stabilise it (if he does the right thing which the voters want him to do)."
Posted by Ahmad A Talib at 12:18 AM

I'm not sure I agree entirely with Tun M's comments on Perak but to each his own! Also by alleging corrupt leaders destroying the party(and the country) meant those chosen are guilty before proven, unless of course he was merely generalising? Too often we think poorly(rightly or wrongly) of politicians, police, judges, civil servants,local universities + local schools, Royals and soon anything traditional! Anyway, I digress.

A good line up is important to create harmony in the country...

For past 4 plus years is the 1st time i do not know where's the country is heading...

I really hope God will open the minds of the leaders to do what best for the country and its people!

Truly, you are an icon of Malaysian journalism.