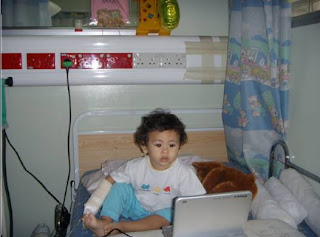 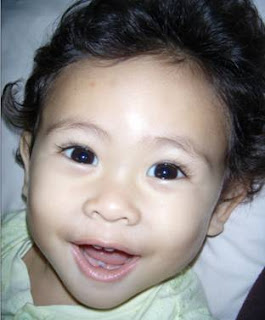 I promised Nik Aiza, a former colleague of mine, to blog her son's ailment a few weeks ago. I must apologise to her for not doing it earlier. I was travelling and doing some NGO work that made me forget what I had set out to do. I now want to rectify that. Hence, this piece.

Aiza's son, Rayyan, went through an extremely difficult period recently, As the doting mother, Aiza focussed all her energy into her son, The following is her e mail to me, which she had also sent to other friends.

It shows that one is never alone when faced adversity. There'll always be families, friends, acquaintances and complete strangers who, out of the kindness of their heart, will come out with deeds or kind words to help us see through the tough times. Aiza certainly had her share of such goodwill.

Tq for sharing that Datuk. Seeing through a member of the family dealing with cancer is never easy on anyone-both patient and family. Our prayers for Nik Aiza and her son Rayyan and wishing all of them a safe journey in these difficult times.

I read your blog on Nik Aiza's son today and I must say I am touched by your gesture and saddened by the ordeal she and her immediate family must be going through.

I guess in our hurried lives which is full of petty little needs like a beautiful house, a fast car, some nice and beautiful ornaments to decorate ourselves, we forget that life is so fragile and valuable. We are almost brought to a halt, not to mention brought to our knees when we hear of such news - when lives of peole suddenly change course.

I must say that you have, if at all brought home an important point in sharing this in your blog - that we must cherish time with family and friends and thank the Almighty everyday for the blessings we have and our life in general.

I also offer my prayers to the Almighty for his grace and compassion on healing Rayyan quickly.

It's the little thing like this that we enjoyed doing so tremendously when we were at Jalan Riong.

It might seem to be small to us but it meant a lot to those we and our readers touched.

I hope you have a good trip back to Nias to visit Mahathir muda, and your efforts to help the Iraqi girl.

A lot of power wrongly applied causes a lot of harm.

I wish our powerful Brothers Syed Nazri and Manja understand this.

Salam Datuk
My cousin's son was diagnosed with the same kind of ailment when he was four years old.
Treatment was tough on the little kid. He lost his lovely locks and weight too.
We didn't think he would make it but he proved us wrong. He is today a healthy 20 year old.
Allah SWT is great.
I pray for Rayyan's well-being and that of his family.

datuk, I was so surprised reading this. knowing aiza personally when I was an intern there, I felt so bad for not keeping in touch with her. remembered those days she used to show me pictures of her baby girl syakirah and little baby rayyan. heck, when I entered maxis, she just finished her maternity leave.