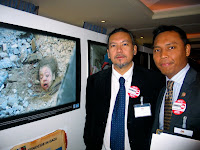 TV3 managed to speak to Shamsul Akmar very briefly just before midnight. Many had tried to get him but we were lucky to have got him for a while. Shamsul is one of several Malaysians on board a humanitarian ship bound for Gaza bringing help and relief items. Shamsul sounded calm but we all know that Israeli commandos had stormed a Turkish ship on the same mission. My TV3 crew led by journalist Halim is also on the same boat as Shamsul. Astro Awani's crew is believed to be on the Turkish ship, together with several Malaysian volunteers from the NGO, Haluan. A humanitarian mission such as this is fraught with risks and danger. But to be attacked by Israeli commandos resulting in fatalities and injuries is something else altogether. This can be likened to a declaration of war on humanitarian volunteers. Can you beat that? An act of aggression that defies logic! Let's pray hard for everyone in the humanitarian mission. And let's think and plan something more concrete too.

Picture is of Shamsul (left) and A Bakar in London last year during a photo exhibition of Gaza atrocities.
Posted by Ahmad A Talib at 1:00 AM

Muslim countries should have nuclear arms so that we will not be stepped on at the whims of the Israeli regime.

Arab nations should have nuclear arms.

Having nuclear weapon will not solve the problem. There's no way the Muslims could match the Americans arsenal, the Israeili big brother.

Putting religion aside, the Palestians must be taught how to accept and live with the Israeli people, lest they want to continue to see their own children growing up in despair, with one hand or one leg or without both.

I am sure many rich Palestinians who have resettled for good in the neigbouring countries will agree to this.

My salute to people like Shamsul Akmar. I pray for him and the group.

I see no reason why we should be having any dealing with them..APCO?

Please do not give reasons because there are none!

A very honorable suggestion by Wake UP on Muslim countries should have nuclear arms..but not the Arab..they are too casino concious and pub goers...never expect anything from them especially on Zionist issues.

We must people like Mahmoud Ahmadinejad not abandoning him!